The operations should be performed as described in each response and not as described here in the documentation. Always use the href and method as specified in the response by finding the appropriate operation based on its rel value. The only thing that should be hard coded in the client is the value of the rel and the request that will be sent in the HTTP body of the request for the given operation.

Both payments and transactions can be in several different states during the course of a purchase. You can find a short description of each state below.

If you want to inspect the transactional status of a payment, read about the paid-payment, failed-payment and aborted-payment operations.

Please note that a authorization where a Failed attempt has been made, but the payer still has attempts left to complete the authorization, you won’t see the Failed operation. It will only appear when all attempts have been made.

The paid-payment operation confirms that the transaction has been successful and that the payment is completed.

To inspect the paid payment, you need to perform an HTTP GET request towards the operation’s href field. An example of how the request and response look like is given below.

The failed-payment operation means that something went wrong during the payment process, the transaction was not authorized, and no further transactions can be created if the payment is in this state.

To inspect why the payment failed, you need to perform an HTTP GET request towards the operation’s href field.

An example of how the request and response look like is given below.

The aborted-payment operation means that the merchant has aborted the payment before the payer has fulfilled the payment process. You can see this under abortReason in the response.

To inspect why the payment was aborted, you need to perform an HTTP GET request towards the operation’s href field. An example of how the request and response looks like is given below.

In Trustly Payments, you can create one type of payment and you can inspect and alter the details of the individual transactions within the payment.

To create a Trustly payment, you perform an HTTP POST against the payments resource. Trustly payments does currently only support the Purchase operation and Sale intent.

A payment contains sub-resources in the form of transactions. Most operations performed on a payment ends up as a transaction resource. The different types of operations that alter the state of the payment by creating a transaction is described below.

The transaction resource contains the generic details of a transaction on a specific payment.

When a transaction is created it will have one of three states:

In the event that a transaction is failed, the transaction response will contain a problem property as seen in the example below. To view all the problems that can occur due to an unsuccesful transaction, head over to the problems section.

While the callback feature is mandatory, we would like to emphasize that it is mainly a fail-safe feature. We strongly advice that it is not your primary mean of checking for payment updates.

When a change or update from the back-end system are made on a payment or transaction, Swedbank Pay will perform a callback to inform the payee (merchant) about this update.

Providing a callbackUrl in POST requests is mandatory. Below we provide three example scenarios of why this is important:

To understand the nature of the callback, the type of transaction, its status, etc., you need to perform a GET request on the received URI and inspect the response. The transaction type or any other information can not and should not be inferred from the URI. See URI usage for more information.

When performing an HTTP GET request towards the URI found in the transaction.id field of the callback, the response is going to look something like the abbreviated example provided below.

The sequence diagram below shows the HTTP POST you will receive from Swedbank Pay, and the two GET requests that you make to get the updated status.

This URL will be used by Swedbank Pay when a payment is Completed or Failed. If your integration subscribes to the onPaymentCompleted and possibly the onPaymentFailed event, no redirect or use of the completeUrl will take place. But if you do not have any event handler for the onPaymentCompleted event, the Swedbank Pay JavaScript will perform an HTTP redirect in the top frame to the completeUrl. You will still need to do a GET request on the payment resource to find the final status (Completed or Failed).

The description field is a 40 character length textual summary of the purchase. It is needed to specify what payer is actually purchasing. Below you will find an abbreviated Card Payments Purchase request.

As you can see the description field is set to be Test Description in the the code example.

Notice that for Redirect, the description will be shown as Test - Reference1583419461, as set in the code example. For the Seamless View scenario, the description is not shown in the payment window, but it is still required in the initial request. 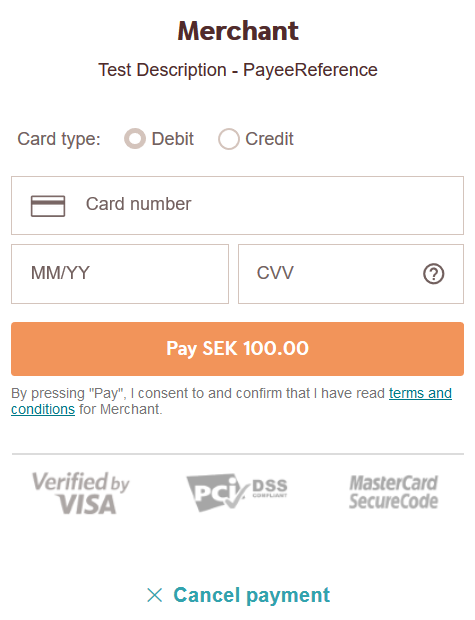 The payeeinfo resource contains information about the payee (i.e. a merchant, a corporation etc) related to a specific payment.

The payeeReference given when creating transactions and payments has some specific processing rules depending on specifications in the contract.

Reconciliation is an important step in an economic transaction. When a payment is reconciled, captured amounts for the payment are matched against the corresponding settlement.

The information needed to reconcile captured funds - the balance report and transactions list - are available for all merchants using Swedbank Pay.

There are two main alternatives for settlement - either we handle the settlement process for you, or you handle the process yourself :

Swedbank Pay handles the settlement process on your behalf, (called “Redovisningsservice”). Swedbank Pay transfers the net amount to you directly.

When choosing Swedbank Pay Checkout we always handle the settlement process for you, gathering all your eCommerce payments in one place. Straighforward and time efficient.

You handle the settlement process yourself

If you will handle the settlement yourself, then Swedbank Pay will send you an invoice with the relevant fees, in addition to the report and transactions lists. Your acquirer will transfer settled funds to you.

The Balance Report (a .pdf file) specifies the total sales for a specific period, including fees and VAT. The report contains three parts: a payment summary and specifications for sales and for fees.

Provides a summary of the Amount sold, Fees and VAT. If Swedbank Pay handles the settlement process, the Transferedamount - shown in the balance report summary is equivalent to the disbursement on the bank statement (the remaining total amount after fees).

Provides a specification over sales for the given period. The sales total is specified per payment area (CreditCard, Invoice) and underlying payment instruments. Each sales row specify Quantity, Sum sales and Amount to pay out, the last one is only eligble if Swedbank Pay handles the Settlement process.

Provides a specification over fees for the given period. The fees total is specified per payment area (CreditCard, Invoice) and underlying payment instruments. Each fees row specify Quantity (sales), Amount (sales), Unit price, Provision and fee Amount. If you handle the settlement process yourselves you will receive a separat invoice for fees.

The Transaction List (provided in .xlsx and .xml formats) specifies all transactions for a specific period, including a summary of transactions grouped by payment instrument. Both formats contain the same information, but the xml file is meant for computer processing while the excel workbook is meant for human interaction.

The first row contains the name of the Swedbank Pay company (e.g. Swedbank Pay Solutions AB) that the merchant has the contract with, and the balance report number. The header fields contain a summary of the transactions displayed in the body.

To do the reconciliation, you need to match the information in your system against the information provided by Swedbank Pay in the balance report and transaction list. Below is a sequence diagram detailing the interaction.

A credit card transaction is made when you either make a capture or a reversal. In the input data for making a capture, you will set the payeeReference. The unique value of this field is the same as the field called OrderID in the reconciliation file.

When you receive the response from Swedbank Pay, the response will include transaction.number. This is the same as the field called TransactionNo in the reconciliation file.

Below you will see the API mapping tables to the fields in the settlement report for Capture and Reversal.

Option B: You will handle the settlement process yourself

The split settlement feature is the easy way of doing settlements for companies with multiple sub merchants. With a few easy steps, the settlement process becomes more efficient with regards to invoicing, payouts and setup for both your sub merchants and yourself.

What we need from you as a company

Sub merchants being connected to Swedbank Pay through the super merchant instead of having separate setups has a lot of pros:

With regards to admin functions, we offer a full integration towards our admin system. This way, you do not have to log in to Swedbank Pay Admin to perform these operations.

Captures and cancels are done by the super merchant the same way as any other normal flow.

When performing operations against a resource in the Swedbank Pay API Platform, it will respond with a problem message that contain details of the error type if the request could not be successfully performed. Regardless of why the error occurred, the problem message will follow the same structure as specified in the Problem Details for HTTP APIs (RFC 7807) specification.

We generally use the problem message type and status code to identify the nature of the problem. The problems array contains objects with name and description that will often help narrow down the specifics of the problem, usually to the field in the request that was missing or contained invalid data.

The structure of a problem message will look like this:

All common problem types will have a URI in the format https://api.payex.com/psp/errordetail/<error-type>. The URI is an identifier that you can hard-code and implement logic around. It is currently not not possible to dereference this URI, although that might be possible in the future.

There are a few problems specific to the trustly resource that you may want to guard against in your integrations. All Trustly problem types will have the following URI structure:

During operation in the Seamless View, several events can occur. They are described below.

This events triggers when a payment enters a paying state ( Sale, Authorize, Canceletc). The onPaymentPending event will be followed by either onPaymentCompleted, onPaymentFailed or onPaymentTransactionFailed based on the result of the payment. Read more about these events below.

This event triggers when a payment has completed successfully. The onPaymentCompleted event is raised with the following event argument object:

This event triggers when the user cancels the payment. The onPaymentCanceled event is raised with the following event argument object:

This event triggers when a payment has failed, disabling further attempts to perform a payment. The onPaymentFailed event is raised with the following event argument object:

This event triggers when the user clicks on the “Display terms and conditions” link. The onPaymentToS event is raised with the following event argument object:

This event triggers during terminal errors or if the configuration fails validation. The onError event will be raised with the following event argument object: